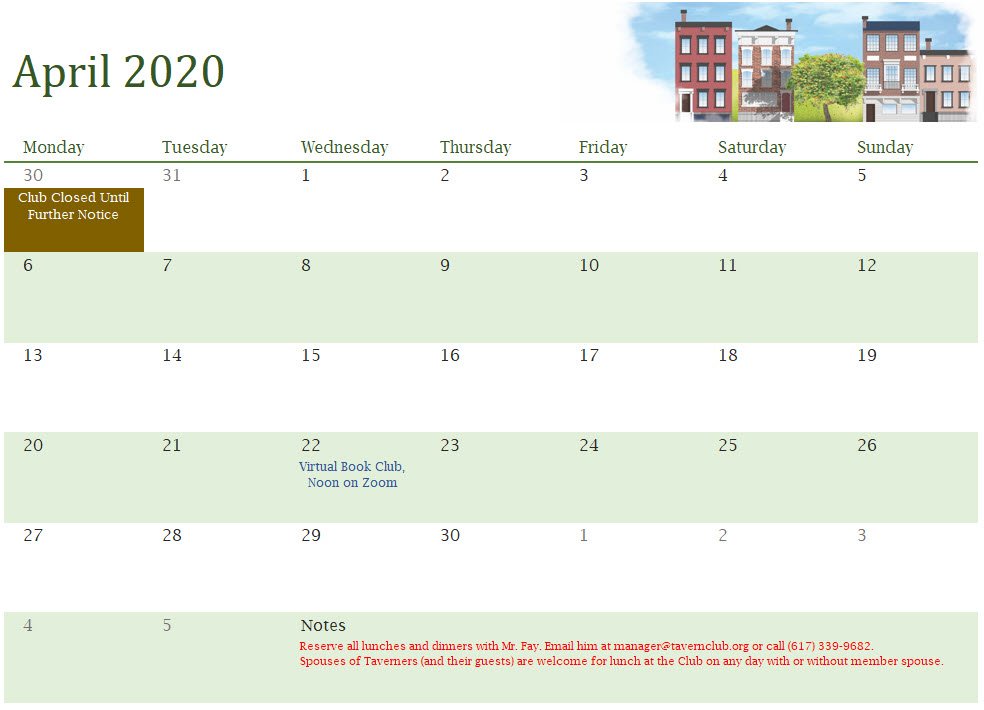 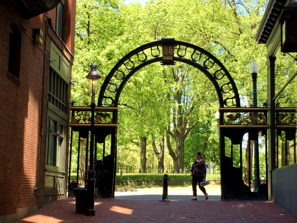 Letter from the President

There is a lot to miss. I am sure we all miss the easy camaraderie of the Tavern. I also miss the boats on the Charles, the chance encounters on the street and the good-natured insults of my buddies. As our national and local leaders dithered, individuals figured out what to do and, except for those youths endowed with immortality, we left the streets and retreated to our homes. Our self-imposed isolation has brought out some old standard amusements – Monopoly, hearts, checkers, and cat’s cradle. I remember how to do cup ‘n saucer and crow’s feet but have lost Jacob’s ladder. In addition, we now have the not-so-homespun amusements of Metopera and Boston Baroque streaming. It was reassuring to see how fast Taverners recognized that the situation was too serious not to laugh at it. Within hours, the internet was alive with jokes and videos. My personal favorite video was the two mimes and the Italian klezmer band with an Honorable Mention to the sleazy, corner dealer selling toilet tissue and Purell. Being at home has its own dangers – indolence, sloth, and obesity come to mind; but there are some advantages. Exploring the depths of our freezer we found a tube of Trader Joe’s Organic Polenta with a use-by date of July 2013. A container of leftover, desiccated, and mummified cassoulet marked “Xmas 2011” rested nearby.

The Club remains under Mr. Fay’s watchful eye and the staff appears to be compensated and safe. When will the Club reopen? It depends on the rate of new cases of the virus and no one knows what that curve will look like. One thing can be predicted with certainty. As long as confinements continue, birth and divorce rates will go up. 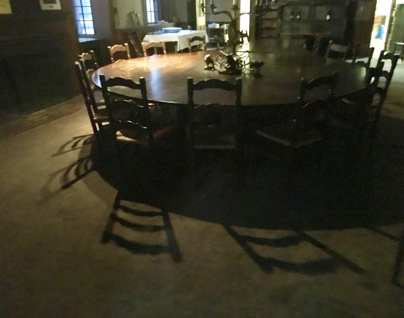 Nancy Maull writes: When we first talked about plagues on February 24—in what now seems like a different world— we touched upon the wisdom of masks and their historical antecedents, the Spanish flu, AIDS, Camus, Pepys, and Bocaccio.  We promised ourselves a continuation Monday Dinner, a Plague II discussion.  Alas.  But herewith, links to themes in the history and philosophy of plagues. What we might have talked about:

The Tavern Club Film Night Committee would have announced this year’s screening: critically acclaimed documentary, Cave of Forgotten Dreams, by Werner Herzog. Capturing an exclusive expedition into all but inaccessible Chauvet Cave in France, the “thrilling,” “immersive,” and “rapturous” film unveils the oldest visual art known to be made by man, dating to 30,000 years ago. Described by the New York Review of Books as “one striking work of art, framing another,” 2011’s Cave was anointed Best Documentary by the NY, DC and LA film critics associations. The film is available online for viewing during your social sequestering.

Play-Reading Luncheons for April and May

The Play-Reading Luncheons in April and May would complete our “Shaw Cycle” of this spring, with a full reading of “Pygmalion.”  In the shut-down context, Anson Wright first had a good idea of making the readings into Zoom sessions, in which people would have their text at the ready, and we could take turns reading.  George Heaton would continue as “impresario” — although the correct Zoom term is “host.”  If anyone is interested in April 7th, please write to George at grheaton@aol.com and he will attempt to set it up.

Patience will be required, in attention to the Pygmalion text!

For the History Lunches that were planned

In March, Sebastian Meyer would have talked about his decade living among the Kurds. You might want to check out Sebastian’s website, filled with his gorgeous photography.

For April, acclaimed urban planner, scholar and distinguished urban design professor at Harvard’s Graduate School of Design, Alex Krieger, was looking forward to discussing his recently published and highly acclaimed City on a Hill: Urban Idealism in America from the Puritans to the Present. Instead, we now have the summer to read his remarkable book well in advance of his Tavern appearance this fall.   A life work, City on a Hill ranges from early Puritan settlements to the prescient eighteenth-century designs of Savannah to Jefferson’s ideal city to the City Beautiful and more recently EPCOT, communes of the 1960s and Las Vegas. Alex is the co-author of Mapping Boston so especially well-equipped to discuss Boston – past, present, and future.

The Tavern Virtual  Book Club
Wednesday, April 22, at Noon
With special guest from the Riverbank in Oxfordshire, introduced by Ratty himself (Ed Tarlov)

Join by Zoom (Link will be provided – rsvp edward.tarlov.md@gmail.com)

Tom Kelly writes: The MeistUrsingers’ concert on April 23 was expected on all sides (“it’s said on good authority that word is going ‘round”) to be the finest yet heard. It features many of the Tavern’s most talented and dedicated singers and all those who appreciate the infinite beauties of music are either singing in the concert or appreciating its many-hued beauties. Or else they come to have a good dinner and bellow songs of Irving Berlin to the incomparable stylings of Mike Scott. Or perhaps both.

Gonzalo Leon introduced us to two fine songs in one of our many foreign (to us) languages, both very beautiful and, so far as we can tell, infinitely sad:

Other favorites, in several other languages, include:

A couple of barbershop favorites to conclude:

Our next gallery show will feature the photographs of Suzanne Dworsky

George Heaton writes: The Narrenabend show this year has been in deep and delightful rehearsal by the Troupe — 24 strong — since the beginning of January.  The play combines a parable of good intentions gone awry, with a hearty Tavern-style on-stage romp, and gorgeous music.  While a “fully polished” show is never the Tavern way, we hope that this one could be “ready to go” in relatively short order once our theatre re-opens. And soon, we’ll send out a “Narrenbend Package” of lyrics, music, and art.

And the Ovid Night that Wasn’t

Peter Rand writes: On Monday night, the ninth of March, we held our final rehearsal for Ovid Night. Our cast was positioned around the dining room table, where, over the course of dinner on Thursday, the 12th, we would give a dramatic recitation of myths from Ovid’s Metamorphoses. The Tavern was vibrating with life. From above, music from the Narrenabend play, in rehearsal, flowed down to us; the voices of Monday night Taverners full of mirth and good cheer came to us from below. This Tavern energy, and word that we would be reading for seventy-plus Taverners and friends, fueled our rehearsal and brought forth passionate recitals from our core performers: Deborah Bornheimer, Steve Clark, Alice Cornwell, Sam Dennis, Mac Dewart, Frinde Maher, Peter Rand, Belinda Rathbone, Sandy Righter, Jane Shaw, Ed Tarlov, and Abigail Trafford. (David Greenway, as Acoetes, the ship’s captain, was rehearsing at home.) As you can imagine, by the end of rehearsal, we were in thrilling readiness! We decided, the following day, with great reluctance, to postpone the event. However, since our readings are from the easily accessible Tales From Ovid  (a Farrar, Straus translation by Ted Hughes of great beauty and power), you will now have time to read, in advance of our return, the seven poems in our program: Creation and the Flood, Tiresias, Echo and Narcissus, Bacchus and Pentheus, Actaeon, Arachne, and Phaeton. These were selected by the organizers of Ovid Night (Alice Cornwell, Frinde Maher, Peter Rand and overseen by Jack Cobb, our distinguished Tavern classicist). So when the lights go back up at the Tavern, you will be primed for a spectacular evening, one that includes spontaneous readings from others around the table in addition to our core performers. That will be part of the fun. So will the costumes: the floor-length ivy garland worn by Sandy Righter, as Bacchus; Alice Cornwell’s trove of Greek sailors’ hats; the laurel wreaths, dipped in gold, assembled by Frinde Maher. Another spectacular Tavern event, along with many others, to keep us looking ahead!

The Committee on Elections will meet electronically on April 17.