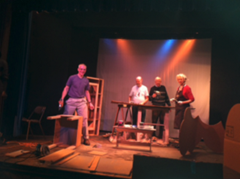 John Tittmann, Peter Haines, Peter Aitken, Katharine Boden at work on the set for “Once a Knight …”

A thrilling dramatization of Chaucer’s Knight’s Tale, brought to you by some of the Tavern’s

finest theatrical talents, many making their debut on the Tavern stage. Do not miss the tense

denouement: “Who will win the faire Emelye’s hand?" Written by Anne Carter, music by Jim

Paintings and illustrations by Chris Whitlock. Chris is a graduate of Massachusetts College of

Art. Before turning to a career in art direction, he made a living as an illustrator and photographer. Nowadays he paints for his amusement in his occasional free time. A jack of all trades, master of none, he chooses his subject matter and media at whim.

Followed by Members Meeting at 8:00:

The Promise of El Sistema, The Venezuelan Musical Miracle

emotional development of children and build opportunity for their families and their communities through their intensive, afterschool, orchestral music instruction.

We’ll listen to a brief profile of children and families in Massachusetts and enjoy first-hand reports from members of a delegation that visited Maestro Jose Antonio Abreu and his gleaming new Center ("Centro") for the Social Development Through Music and to El Sistema "nucleos" in and around Caracas, side-by-side with accounts of path breaking Massachusetts programs and pertinent arts funding initiatives. Since Gustavo Dudamel, El Sistema’s most celebrated graduate, assumed the podium of the Los Angeles Philharmonic, a new collaboration has been formalized between the Venezuelan Centro, Bard College, The Longy/Bard School of Music, and his orchestra. During our visit, Maestro Abreu, Longy/Bard President Karen Zorn, and Bard President Leon Botstein signed the agreement formalizing this marriage with El Sistema. It will expand the corpus of highly qualified and credentialed leaders and serve as a platform for continuing professional exchange. Maestro Botstein’s penetrating account of Shostakovich’s devastating 7th Symphony with the principal Youth Orchestra of Caracas followed the signing ceremony. It left no need for more words about the transformational powers of music.

Carolyn and Eli Newberger, Board of Advisors, Kids 4 Harmony, Berkshire Children and Families.

Peter Rand on his forthcoming book, Conspiracy of One: Tyler Kent’s Secret Plot against FDR, Churchill, and the Allied War Effort

A debonair young code clerk stationed at the American Embassy in London in 1939, Tyler Kent photographed two thousand classified documents, including top secret telegrams Winston Churchill sent President Franklin D. Roosevelt with inducements to help him fight the Nazis. Kent was planning, he said, to turn his archive over to FDR’s enemies in Congress. Instead, U.S. Ambassador Joseph Kennedy turned Kent over to the British. Was Kent a spy? How did MI5 track him down? What was the role of pro-German sentiment and anti-Semitism in the political turmoil around the run-up to World War II? Peter Rand magically recreates this long-buried true story, from beginning to end, in the course of which many other questions arise. Among them: what is the role of minor players like Kent in the kind of war that was waged, and in history in general?

Please join us for Peter’s presentation.

The Elections Committee will meet on Monday, April 22 , at 5:30 in the Perry Room.

The names of two candidates for membership are in the book in the library for members’ review.

Get out your reading glasses! The Tavern Book Club has an excellent program in store for the Spring! On April 24, in response to a groundswell of feeling to have one of the literary classics, Joan Yogg will lead our discussion of Nobel Laureate Rudyard Kipling’s Kim, a chance for us all to visit the byways of Colonial India. Our May selection, to be presented Wednesday May 22 by Chris Smallhorn, is Amity Schlaes’s new book Coolidge. Those interested may also wish to peruse Robert Sobel’s Coolidge – an American Enigma, as well as The Grand Pursuit by Sylvia Nasr, an economic history from Malthus and Marx to modern times, very relevant to the Coolidge story, as he used his parsimonious principles, few words and good sense to preside over a period of unprecedented American growth, technological development and prosperity.

And on Wednesday June 26 we will discuss Hanoi Adieu by Mandalay Perkins, an evocative memoir of a Frenchman in Indochina between 1940 and the 1970’s. Several of those planning to participate have either recently been to Hanoi, or were there during what the Vietnamese refer to as the American War, or both.

meeting of the Tavern Book Club in August, in Nahant.

No Poetry Lunch scheduled for April.

The MeistUrsingers will meet but the dates are yet to be determined – notifications forthcoming.

The Jim Terry Musical Retrospective – Still in gestation, but the heartbeat is detectable, shaping up to about 30 songs from a dozen shows done by more than 25 singers – Audience, including guests, would be much appreciated.

On March 7 Tod Randolph returned to the Tavern stage and gave a stunning one-person biographical portrayal of Dorothy Thompson, "the first lady of American journalism". Tod entirely captivated the audience in a performance lasting for 75 minutes, with a perfectly in-period set compiled by Peter Randolph who also ably operated the lights and most of the telephone rings.

Friday Lunch, April 5 – This will be an informal informational lunch (no guests) when members can put questions to the Emerson Working Group.

Monday Dinner, April 8 , 8.00pm – A meeting of the Members of the Tavern Club is called at

the premises of the Tavern Club, 4 Boylston Place, to hear and consider the following matters:

Report of the last Meeting

1.      The Emerson Working Group will review the adjustments made to the Draft Option Agreement by the Tavern Club and Emerson College after the Meeting of February 11, 2013.

2.      The President will call for a vote to ratify the Final Option to Purchase Agreement with Emerson College, dated February 15, 2013.

3.      The Emerson Working Group will review the progress of the Emerson Project, including the time frame for future developments and negotiations.

Copies of the Final Option Agreement will be emailed before the meeting, and copies will also be available at the Tavern Club after April 1, 2013. The Emerson Working Group will also send a summary of progress in the week of April 1.

Finds fault only with himself!

For a complete, downloadable copy of the April, 2013 Tavern Club newsletter; click here.

MeistUrsingers
The MeistUrsingers will gather at 12:20 on March 7 and 21, with Mystery Maestros conducting. Please let Tony Fay know if you are staying for lunch.

pecial Event – Thursday, March 7
Tod Randolph on the Tavern Stage, daughter of Tavern thespian Peter and Helen Randolph, Tod will perform Cassandra Speaks, a play written by Norman Plotkin, as Dorothy Thompson on the day of her third marriage, bringing to life her extraordinary career as "First Lady of American Journalism". Ms. Thompson, married to Sinclair Lewis, was the first American journalist expelled from Nazi Germany, and was hailed by TIME magazine in 1939 as the second most influential woman in America next to Eleanor Roosevelt.

Excerpts from reviews:
From Berkshire on Stage:
“Actor Tod Randolph and writer Norman Plotkin have plucked Dorothy Thompson from the dustbin of history and brought her amazingly, even brilliantly, to life again.

In the 1930’s and ‘40’s, Thompson was known as the “First Lady of American Journalism”. Time Magazine named her the most influential woman in the country, second only to Eleanor Roosevelt.

“Randolph does more than just act out her part, she glides into it, virtually donning Dorothy Parker’s skin in one of the most complex performances I have seen in years. It is an astonishing tour de force”.

From the Berkshire Eagle:
“Plotkin delivers a fascinating, complex, fully formed and dimentioned human being who is all too aware of her own shortcomings and wrestles with them even as she wages more fierce battles against the background of world war.”

“Thompson has an articulate representative in Randolph. An absolute master of her craft, Randolph has a way of working herself beneath the skin of her characters. She burrows deep within Thompson here. The result is at once revealing and compelling”.

Guest Will Englund, foreign correspondent for the Washington Post based in Moscow, recipient of the 1998 Pulitzer Prize, old friend of David Amory. Members only.

History Lunch
Wednesday, March 20 at 12:15. The Tavern is pleased to welcome back distinguished historian Eve LaPlante in a special Women’s History Month program. Eve is the author of Marmee & Louisa, The Untold Story of Louisa May Alcott and Her Mother, and My Heart Is Boundless, Writings of
Abigail May Alcott. Eve will help us explore the lives of Abigail May Alcott and daughter Louisa May, two Boston women who coped daily with stultifying social strictures in the age of transcendentalism and who led hard lives until the success of Louisa’s Little Women in 1868. Guests welcome.

Poetry Table
Tuesday, March 26. We will take up the topic of recent U.S. Poet Laureates. Who are these people? How are they chosen? What is their role? Most important, what are they writing? Is it any good? And why are so many of them named Robert? Your poetry chair.

ook Club
Wednesday, March 27 at 12:00. Bisi Starkey will lead a discussion of the classic travel books by Patrick Leigh Fermor: Between the Woods and the Water and A Time of Gifts, relating his 1933 walk from the Hook of Holland to Istanbul.

istory Lunch & Arts Roundtable
Thursday, March 28 at 12:15. Leila Ahmed, the Victor S. Thomas Professor at Harvard Divinity School, will be our special guest. We will informally discuss her latest book, A Quiet Revolution: The Veil’s Resurgence from the Middle East to America, a study of the rise of political Islam and the ever-changing meaning of the veil, or hijab, for Muslim women. Having grown up in Cairo in the 1940’s, Leila brings personal insight to help Westerners understand this “quiet revolution,” which is  rooted in the colonial past and the excesses of
the Nasser, Sadat and Mubarak regimes. A timely sequel to Chris Lydon’s report from Egypt in January, and for all who want to better understand today’s Middle East. Guests welcome.

Narrenabend
Anne Carter and Jim Crissman combine comedic talents to take Tavern theater to transcendent new levels for Narrenabend. In Once a Knight an all-star cast explores the many dramatic opportunities that Chaucer passed up in his much-neglected Knight’s Tale.
Medieval England meets capricious Greco- Roman gods in a one-sided contest in which the gods hold all the cards. Don’t miss this outstanding production, which is limited to a one night run on April 4!

Wednesday (dress) and Thursday, April 3 and 4

A downloadable PDF of the March 2013 calendar is available here.