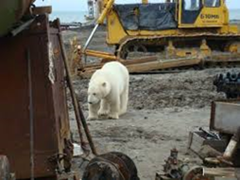 As you will have noticed, there is a fair amount of turmoil going on around the Tavern these days, with Boston Water and Sewer installing new pipes in Boylston Place as well as preparatory work starting for the Emerson College construction. We continue to have regular contact with Emerson, and they have shown sensitivity to our concerns about access and noise, and are proposing ways to minimize our unhappiness. Moreover, they have shown a willingness to support us financially with respect to improving our emergency egress. We are in the process of finalizing a document with them regarding these matters, and will report details to everyone when we have done so.

The construction is a two-year project, and it is expected that the first six months will bring the most aggravation, but we hope that sometime this Fall we shall 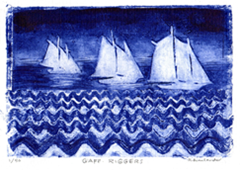 Mary Rhinelander will be showing a variety of representational prints, some older work and some hot off the presses. Included will be etchings, monoprints, block prints, collograph, and various combinations thereof.  Mary will bring examples of the plates to the opening, in case anyone is curious about the process. Below: a 4 x 6” collograph entitled “Gaff Riggers.”

We shall discuss among other things, and just after the Anniversary of Gallipoli, “Whither Turkey?” Steve Clark, who since his recent retirement has spent more time in that pivotal country than at home, will join us. Sign up now.

BarclayTittman, who knows the Sonnets of Shakespeare backwards and forwards, has taught courses on them, will discuss the Sonnets and Neil Rudenstine’s new book Ideas of Order which posits that the Sonnets, among the most beautiful love poems ever written, tell a personal story of Shakespeare’s own experiences of Love in its many forms. Bring your own copy of the Sonnets so that we may read and discuss them together. Promises to be a memorable Lunch – Guests most welcome. Call Tony Fay 617 338 9682.

Members only, Medals and Black Tie

“Bernstein meets Broadway: Collaborative Art in a Time of War”

Carol’s work has relevance at a transcendental level to our more modest endeavors on the stage, not least in her interest in broad currents that affect music making, cross-disciplinary creativity, and gender. Carol knows a lot but speaks plainly. This promises to be a glorious conversation, and as usual Guests are very welcome.

NOT a farewell Lunch, at which Stephen Clark—and Frinde Maher— who are NOT going anywhere, will lead a discussion in which we consider History that we all believe but which never happened.

TONYPANDY is a Welsh village with a monument to rioting miners shot to death by soldiers on the orders of Winston Churchill. Only problem, the soldiers were unarmed and no one was shot.

Richard III killed the boy princes in the Tower. NOT.

Monday May 25 being Memorial Day 2015, Poetry Lunch will lay off (and go a-Maying), having lately feasted off the rarities of Dante, Shakespeare and Homer at Tavern tables.

Taverners! Prepare for an upcoming literary evening on Thursday, May 28, that will feature a descent over dinner into Dante’s Inferno. Book your reservations now for this tour. Tickets are going fast. Guests are welcome! You can expect the same rare adventure and drama you may have enjoyed at other annual literary dinners, Odyssey night, Ulysses night, Moby Dick night and others. Reading from a script adapted from Robert Pinsky’s translation, seasoned Tavern performers will guide you on an unforgettable journey to the very lowest circle of Dante’s hell – and back. And, if you happen to have a painting or drawing inspired by an earlier visit, do bring it to the Tavern by May 20th to exhibit.

On April 2 the Tavern was treated to “Andy Warhol: The Musical” by Belinda Rathbone (book) and Bob Linderman (music and lyrics) . Directed with great skill by John Tittmann, this sensational play was a testament to the Tavern’s spirit of creativity and experiment.

On April 16 the MeistUrsingers gave their Annual Concert. Twenty-three singers, conducted by Tom Kelly, sang a Spring Concert with works of Morley, Purcell and Schubert; a round by past-Taverners Randall Thompson and Philip Rhinelander; the barbershop piece “I’m Forever Blowing Bubbles”; J.K Paine’s “Radway’s Ready Relief”, and of course the Tavern Hymn, often sung by MeistUrsingers at Tavern Memorial services.

A loyal and enthusiastic audience supported the Singers, and then all joined after Dinner in a Gershwin Singalong, accompanied by Mike Scott on piano and NEC student Mike Avitabile on piccolo.

On the afternoon of Wednesday June 3 the Tavern Bears will seek to extend the Longest Winning Streak in Sports History by defeating once more the ever-hopeful and gallant St. Botolph Club Softball Team. The Field of Honor will be the Esplanade. Potential Players as well as Coaching staff and other needed supporters (human that is) should contact General Manager and Coach Ed Tarlov in order that he may begin to consider the starting line up and pitching roster. He will also suggest training regimens and provide details of times and location, as well as the Practice session the prior afternoon, June 2. The St. Botolph Club will host the post game Dinner. 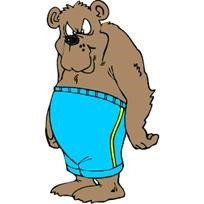 For their twelfth year, Summer Shorts

The Design of Church buildings, the first 2000 years – Brett Donham will give a talk and slide show, accompanied by his own soft shoe routine.

Monday June 25 – Return of the Poetry Lunch, in which we visit Lucretius, a philosophical poet, and lay emphasis on the latter term (as did Santayana in setting him aside Dante and Goethe in Three Philosophical Poets).We shall go around the table with a few Latin hexameters, and later visitations (Dryden, Tennnyson or BYO) as time permits. Albert LaFarge is Host as usual.