It is twenty-five years since the Ladies arrived at 4 Boylston Place and entered through the green door as Members. Today, without quotas and with little change in Tavern Customs and Habits, the Lady Members play numerous important roles in Tavern life. As with the Gentlemen, some do More and some do Less, but the contributions of the Distaff are Manifold.

Therefore, it is declared that on the evening of Thursday, October 16, there will be held a Dinner at which this Coming and this Present will be celebrated, with Song and Story. Some songs will be old and some new, some will be sung by those intrepid Ladies who first trod the Tavern boards in male dress, and the gallant Males who sang with them. As with Tavern stories some will be long and some true, and we shall be in the mood for Toasts.

Some of those who will attend played great roles in this event twenty-five years ago; some did not. We shall remember them all. 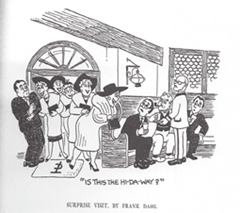 Sign up now! This historic event will be a sell-out. MEMBERS ONLY, and we hope they will be resplendent in evening finery, with medals.

The 2014 Halloween Plays Competition is upon us!

The final competitors are:

*Wednesday Night Dress Rehearsal for Cast and their guests only, normal attire. Non Cast Members and their guests may attend on Wednesday if there is space available and if the Member signs up for Thursday as well.

Art Gallery Opening
Monday, October 6 from 5 to 6:30
PEGGY BADENHAUSEN, wife of Taverner Tom Kelly, will have an exhibit of her paintings and monotypes at the Tavern Gallery. Taverners and their guests very welcome.

Belinda Rathbone will discuss her book just out this month, The Boston Raphael, the behind-the-scenes drama surrounding a disputed painting acquired for the Boston MFA by Belinda’s father, past Taverner Perry T. Rathbone, director of the MFA from 1955-1972. Guests welcome.

The MeistUrsingers gladly welcome all who like to sing, including those who have lately joined the Club. Followed by lunch for those who can stay (sign up with Tony Fay).

Our guest Sara Day, author of Coded Letters, Concealed Love: The Larger Lives of Harriet Freeman and Edward Everett Hsle (2014). Sara will explore with us the complex private lives of these two activist intellectuals and soul mates during the rapidly changing Gilded Age. Guests welcome.

The meeting of the Tavern Book Club will take place at the spectacular Civil War Museum, the Grand Army of the Republic Museum, 58 Andrews Street in Lynn. Carol Bundy’s talk will use her book, The Nature of Sacrifice, as a jumping off point to discuss Massachusetts’ role in the war for Emancipation. She will focus not only on the idealistic “fighting abolitionists” who were martyrs to the movement, but also the more conservative industrialists who financed their regiments and the larger effort. What can we learn from this about radical movements that go mainstream?

The museum is near the Lynn Commuter rail stop. Nearby free parking is available – you may wish to car pool. In the usual light mid morning traffic the museum is a 30 minutes from downtown Boston.  Lunch and refreshments will be provided. Please let Ed Tarlov – edward.c.tarlov@lahey.org – know of your plans to attend this sure to be memorable event. Guests welcome.

Our November 26 meeting, led by David Scudder, will focus on Thomas Piketty’s Capital in the 21st Century, which treats the grand dynamics that drive the accumulation and distribution of capital and the long term evolution of inequality, a must for those who would like to better understand the forces of economics. Being present at David’s discussion is guaranteed to move us toward that valuable objective. This is a big heavy book, and David recommends NOT reading it – he will sum it up in his own wonderful way.

David Greenway enlightened and entertained a full house as he discussed his experiences and reflections on decades of reporting, some included in his newly published book Foreign Correspondent.

Taverners should have received in their mail, snail or e, a letter from the Chairman of the Boylston Place Foundation seeking your support to pay for some of the costs of preserving Tavern Club archives, paintings, posters and other records. The work supported by the Foundation continues, in enhancing the Tavern Art collection, improving the Archives and systems to support them. We still are in need of volunteers to assist in filing.

For a complete downloadable copy of the October 2014 calendar click here.