Book Club
The Tavern Book Club without Borders will meet at noon on Wednesday, November 6. Chris Smallhorn will discuss Vladimir Nabokov’s Speak Memory, a most beautiful piece of autobiographical writing which will bring the reader new appreciation of this remarkable man.

MeistUrsingers
This month the MeistUrsingers will sing under the baton of Maestro Tom Kelly on Thursday, November 7 and Thursday,

November 21 at 12:20 in the theatre.  Please let Tony Fay know in advance if you plan to stay for lunch.

Arts Roundtable
The Arts Roundtable will be taking a private tour of John Singer Sargent’s watercolors at the MFA, led by curator Erica Hirshler, at noon on Wednesday, November 13. This event, limited to 20 participants, is already fully booked. If you are not among the early birds who caught the worm, call Tony Fay and ask him to put your name on the wait list. Or just go to the show! Through January 20, 2014.

The Appalachian Trail – Thursday, November 14
Get away from it all with Taverner Art Hodges, who will show a spectacular movie of the Appalachian Trail and recount his adventures hiking its entirety. Cocktails at six will be followed at 6:30 by Art’s presentation in the theater, and then on to dinner with questions and answers.

A retrospective of paintings, photographs, and monotypes created by Taverner Katharine Boden here in Boston and beyond. Guests welcome.

“The Banishment and Escape of Roger Williams from Massachusetts in 1636” – Stephen Clark, Taverner, explorer of the past, will talk about why Roger Williams was cast out of Massachusetts and escaped to Rhode Island on foot in January 1636. Why did Williams so infuriate the colonial establishment that banishment became inevitable? What in Williams’ five years in Massachusetts Bay prepared him to be the harbinger of religious tolerance in Rhode Island? Guests welcome.

On Monday, November 25 Poetry Lunch will take a look at poets Pound, Williams, Moore, Lowell, and Bishop, and the rise of the fact and the image in American lyric poetry. It will not be as daunting as it may sound. Guests welcome.

Elections Committee
Next meeting of the Elections Committee will take place on Monday, November 25 at 5:30 in the Library. Please send proposed candidate information to Sandy Righter, Chair. Candidates already under consideration may be brought to dinner that night with the approval of David Amory, Secretary, and by notifying Sandy Righter in advance.

On October 3 former Taverner, scholar, prolific author, and Boston Globe columnist James Carroll gave a brilliant talk on the history of the Roman Catholic Church from the end of the Holocaust to the present, illuminating the positive and radical changes occurring today under Pope Francis. This was one of the most stimulating discussions in recent memory. We hope someday to entice Jim to rejoin the Club.

The Halloween Plays on October 31:

And the Bear goes to: John Paul Britton (Bank Job)

Tied for second: Elizabeth Hunnewell (The B’s Knees) and Watson Reid (What’s in the Cards?)

The B’s Knees by Iva Paine. Stephen Score made his directorial debut. Nancy Maull and Rusty Tunnard played the recovering patients, Sally Wheatland Fisher as the less then accommodating Nurse Hatchett, and John Finley IV as the egocentric Dr. Meniscus.

The next entry, What’s In The Cards? by mystery Author Fortuna Merlin, was directed by Sam Dennis. His cast had Charlie Storey in the role of Ernest, Mary Rhinelander as Dr. Sibyl Robinson, his wife, Abbie Trafford as Lulu the psychic, and Peter Williamson as Karloff, Lulu’s lover.

Michael Scott provided the musical interludes for the evening, and working behind the scenes: Brian Rosborough, Anne Carter, David Chanler,

A scene from The B’s Knees (Photo: B Williams) 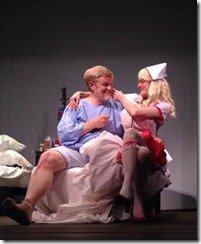 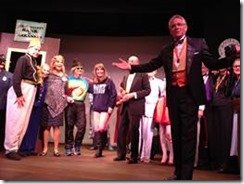 For a complete, downloadable copy of the November, 2013 newsletter click here.