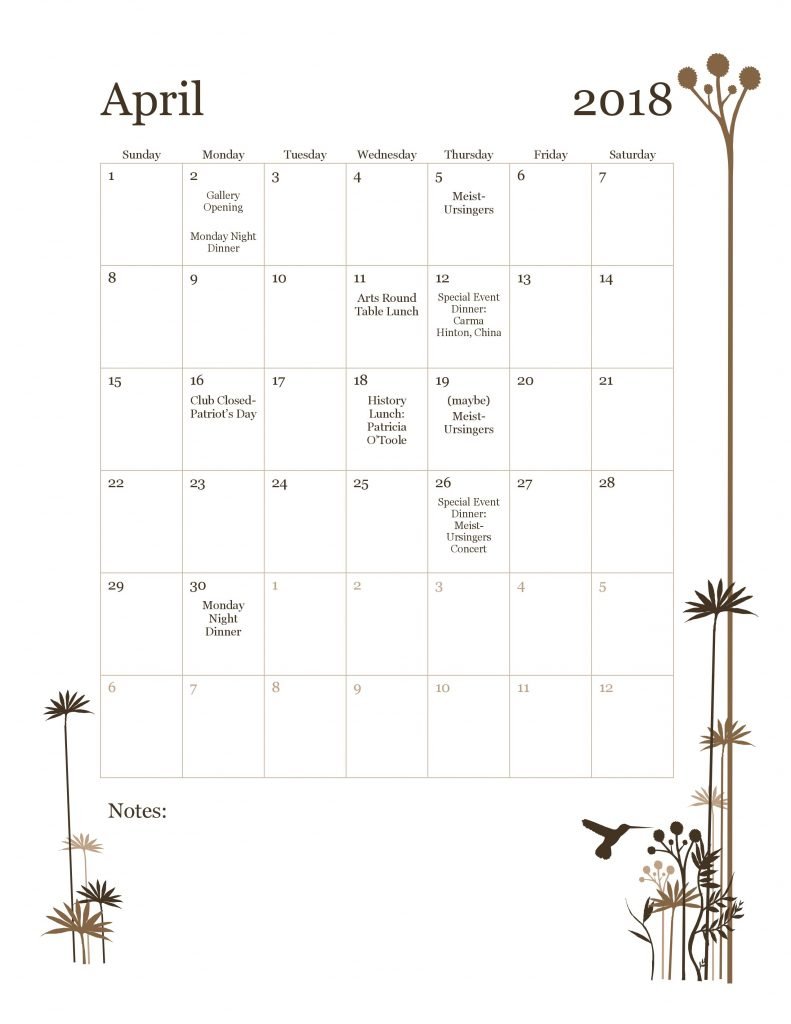 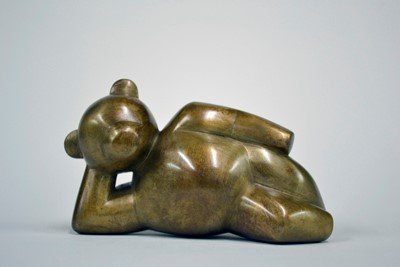 “I’ll be showing small bronze sculptures, made for the hand as well as for the eye.  The work ranges from pure abstraction to stylized animals (some bears), and architecture.  My artistic ancestors include stone axes and ancient ethnographic objects; to name a few: Cycladic, Shang Dynasty, Olmec, African.  More recent influences are Henry Moore, Brancusi, and Noguchi.” Peter Haines 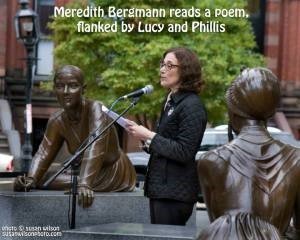 The Arts Roundtable will welcome the sculptor Meredith Bergmann. Meredith has made both private and public works, including the Women’s Memorial on Commonwealth Ave. Mall (between Fairfield and Gloucester Streets). The bronze and marble memorial represents three remarkable women with Boston connections: Abigail Adams, the famous First Lady who was a strong advocate of women’s rights, Phillis Wheatley, a colonial slave and the first published African-American poet, and Lucy Stone, an abolitionist and suffragist who was one of the first American women to earn a college degree. Among Bergmann’s many other works are the September 11th Memorial at the Cathedral of St. John the Divine in New York City, a large bronze bas-relief commemorating the labor movement for the Massachusetts State House, and a memorial sculpture in progress of Franklin D. Roosevelt for installation on Roosevelt Island in New York City. Come celebrate the 15th anniversary of the unveiling of the Boston Women’s Memorial with its creator. Guests welcome. 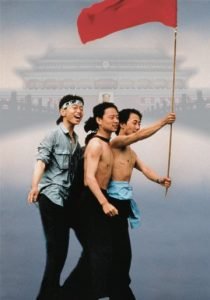 We are pleased to welcome Carma Hinton, Robinson Professor of Visual Culture and Chinese Studies at George Mason University, who is both an art historian and a filmmaker. Born and raised in China, with Chinese as her first language and culture, Carma has devoted her life to documenting and teaching about China.  Together with her husband, Richard Gordon, Carma produced and directed 13 documentary films about China.  These films explore a wide range of topics, from traditional culture, the arts, medicine, and village life (Stilt Dancers, Small Happiness, All Under Heaven, and To Taste 100 Herbs) to major historical events, such as the protests at Tiananmen Square in 1989 (The Gate of Heavenly Peace) and the upheavals of the Cultural Revolution during the1960s (Morning Sun).

You may remember that Carma spoke to Taverners on the occasion of the opening of Yin Yu Tang, the Qing dynasty Chinese house she helped bring to the Peabody Essex Museum in Salem. Others will recall her grandmother Carmalita, founder of the Putney School in Vermont, or her father William Hinton, agriculturalist and author of Fanshen and Shenfan.  Guests welcome. Reserve early.

History Lunch with Patricia O’Toole, Wednesday, April 18, 12:15
Patricia O’Toole on her new biography, The Moralist: Woodrow Wilson and the World He Made. 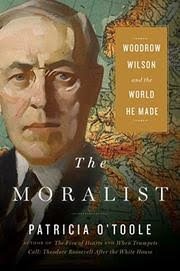 A penetrating biography of one of the most high-minded, consequential, and controversial US presidents, Woodrow Wilson (1856-1924). Patricia O’Toole, author of acclaimed biographies of Theodore Roosevelt, When Trumpets Call: Theodore Roosevelt after the White House (2005) and Henry Adams, The Five of Hearts: An Intimate Portrait of Henry Adams and His Friends, writes a cautionary tale about the perils of moral vanity and American overreach in foreign affairs. Many of O’Toole’s revelations break fresh ground, including the unreliability of Wilson adviser Edward M. House as a source. A bonus derives from the obvious relevance of the Wilson presidency to 21st-century politics. The ways in which Wilson expanded presidential powers bring to mind presidents George W. Bush, Barack Obama, and Donald Trump. Guests most welcome! 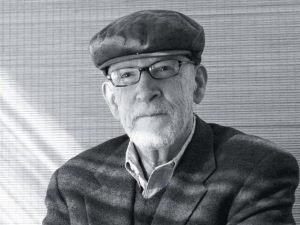 Tavern Poetry Lunch delights in a return visit from our esteemed friend David Ferry, whose much-heralded translation of Virgil’s Aeneid was published in the fall to rejoicing. David will read from and discuss the Aeneid, as he did two Februaries ago; and he’ll probably entertain us with a few of his own poems, and other translations, too. His Bewilderment: New Poems and Translations won the National Book Award in 2012, and a slew of other major honors have come his way for earlier poems and translations (Virgil’s Georgics and Eclogues, Horace’s odes, and even the Epic of Gilgamesh): in 2011, he was awarded the Ruth Lilly Prize for lifetime achievement from the Poetry Foundation. He is the Sophie Chantal Hart Professor (emeritus) of English at Wellesley College and still teaches around town. Guests are welcome but the table will be bursting at the seams if previous lunches are an indication–both with David and also Sallie Spence’s Virgil lunch in October. 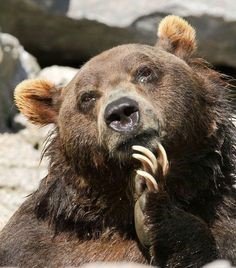 We will discuss The Undoing Project by Michael Lewis and Thinking, Fast and Slow by Daniel Kahneman. Both books deal with the work of two Israeli psychologists, one of whom (Kahneman) won the Nobel Prize–in Economics!  Their studies of our decision-making show how seemingly irrelevant factors shape choice.  For example, judges grant parole more often after morning coffee, lunch, or afternoon tea. The results of recent experience may unduly influence our decisions. Much of what we believe to be rational and logical may not be. Guests welcome – Reserve with Tony Fay.

MeistUrsingers  April 5, and MAYBE April 19 and 25 with Jim.
Afternoon rehearsal with Tom April 26, before Concert. MeistUrsingers are reminded to sign up with Tony Fay if they can stay for lunch.

The Committee on Elections will not be meeting in April. Next Meeting May 21.

The MeistUrsingers have the pleasure and the honor to present their inimitable stylings in a program, not too long, of works by Taverners and non-Taverners, including Randall Thompson, John Dowland, James Terry, and Tony Hutchins. At dinner, we will have the pleasure of hearing Taverner Mike Scott on the piano as we all seek to drown out his performance by singing Gershwin’s greatest tunes. Taverners and their guests are cordially invited.

Musical Retrospective, March 8
Numbers of Taverners moved, sang, and enacted songs by Hatches Senior and Junior and by Brad Trafford, all from 1939 to 1983.  If the lyrics were occasionally obscure and our figures less than neat, there was love in it and the great pleasure of discovering and rediscovering terrific music.  The audience was forgiving and appreciative.  All thanks to Jim Terry and Elaine Woo, the impresarios and accompanists.

Narrenabend, March 29
Thought You Was Dead, penned by Watson Reid, and brilliantly directed by Peter Rand, brought a 1920 west Texas saloon to the Tavern stage.  The four-man band, three guitars (George Perkins, Watson Reid, Chris Whitlock) and a cello (Andy Calkins) filled the hall with country western songs, all arranged and composed by Watson Reid, who also wrote the lyrics.  The tale of jilted lovers and outlaws kicked off when Bougie (JoAnne Dickinson) returned in grand burlesque fashion to the cowboy town Pas-de-Place after an absence—when she was thought to be dead.  Her desire, in a French accent, was to reclaim her lover, Hawker (Albert LaFarge), who by now was inconveniently married to Tris (Mary Scott). Jake Danuls (Peter Randolph) the saloon keeper served eggs in beer—real eggs—but couldn’t stop the inevitable gunfight in his establishment.  The telephone operator, Maude (Abbie Trafford), comically delayed the news from getting to Sheriff Tracer (Jane Manopoli).  To add drama to the drama, a spectacularly costumed Deus-Ex-Mexica (David Scudder) used his divine powers to transform three cows into cowgirls (Sandy Righter, Kate Dahmen, Sallie Spence McGregor) thereby providing polka dancing partners for the cowboys (Ben Cox, James Houghton, Brian Rosborough).  All was resolved in forgiveness and joy, as the bullets were found to be blanks, and no-one really was hurt.  The costumes (Martha Eddison) and the sets (Warren Ross, Peter Haines) lended visual form to the music.  Sounds of lighting and gunfire (David Chanler) were enhanced with excellent lighting effects (Gabrielle Wolohojian, David Lawrence).  Prompting was invisible (Jane Shaw) but effective (!) and the curtain (Polly Drinkwater) pulled without snags!  The final polka dance (choreography by Elaine Woo) ended the production with the audience joining the clapping and foot stomping.  And of course, the poster (Kate Dahmen) will memorialize the event.

For a complete, downloadable copy of the April 2018 Tavern Club Newsletter, click here.