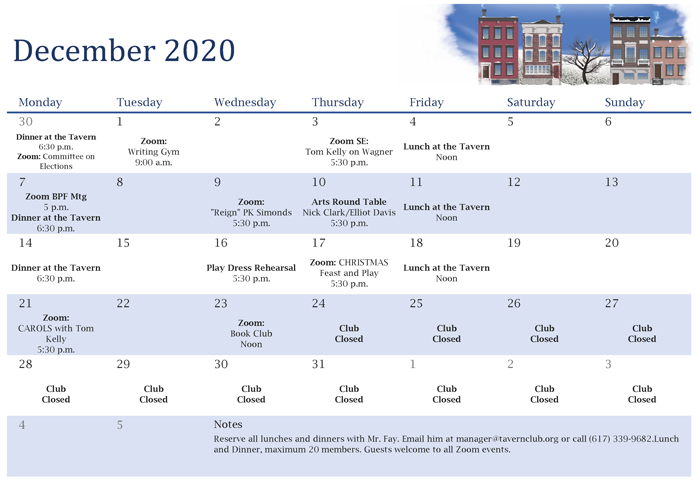 Message from the Secretary:

Despite the limitations on our ability to assemble at the club, November turned out to be an engaging and eventful month, punctuated by intimate, in-person Monday dinners and well-attended Zoom events ranging from Chinese history to American elections, both real and imagined.  December promises to be even more festive, with the highlights being the traditional December doubleheader of the feast/play night and caroling evening, both reimagined for Zoom but trimmed with all the fixings that we know and love. Lots of other events, too. Sign up early.

We send our warmest wishes to you and yours for joyous, if distanced, holidays and join with you in anticipating a healthy and happy 2021, a year that should see us once again convening at our beloved Boylston Place. – Rusty Tunnard

The Tavern Club is open for Monday Night Dinners and Friday Lunches this month, maximum of 20 members.  Guests welcome to all Zoom events.

Reserve for all events, Zoom and in Tavern, with Mr. Fay, manager@tavernclub.org.

An impromptu writing workshop to engage our muses, share thoughts, and a virtual cup of coffee.

Our inimitable impresario takes us on a trip to Bayreuth in 1876 for the first performance of Wagner’s Das Rheingold. Illustrated with pictures, music, and special guest stars. The scene opens in the River Rhine….

Friday, December 4:  Friday Lunch at the Tavern, Noon, members only.

Have you ever wondered what goes into creating a series for Netflix? Taverner PK Simonds, a writer, and producer of the streaming giant’s 4-season “Reign,” will take us there. 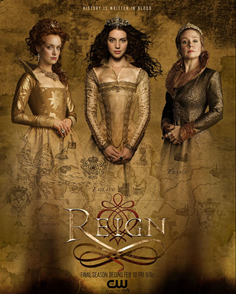 The series, which began in 2013, is based on the life of Mary, Queen of Scots. From the French court of Henry II, where Mary grew up alongside her first husband, the dauphin Francis, to the treacherous shores of Scotland and her rivalry with Elizabeth II for the English throne and fatal marriage to Lord Darnley, “Reign” is non-stop political and sexual intrigue, with spectacular sets and costumes and enduring portrayals of the main figures in the drama, especially Adelaide Kane as Mary.

To get the most out of this special event, we urge you to watch a few episodes of “Reign” on Netflix in advance

Angels! Angels! Join Taverners Nick Clark and Elliot Davis for a discussion of angels in the works of Eric Carle and Paul Klee.  The recent exhibition at the Carle Museum (Amherst)  Eric Carle’s Angels: an homage to Paul Klee,  has spurred Nick Clark and Elliot Davis to explore their overlapping interest in the angels found in the works of Carle and Klee. Elliot and Nick have prepared a slide show to accompany their fascinating conversational exploration of their common and complementary interests in Klee, Carle, and angels. Join them for a cocktail conversation.

Friday, December 11:  Friday Lunch at the Tavern, Noon, members only.

You’ll have to supply the feast this year, but the festivities will feature traditional Tavern Christmas rituals, toasts, introductions, buttons, and a guest appearance by the Great Man himself, followed by this year’s Christmas Play.

2020 has been a journey for all of us … and such a long journey … With the voices singing in our ears That this was all folly. Were we led all that way for Birth or Death?  With the help of Lancelot Andrewes and T. S. Eliot, the direction of Rev. Joel Ives and Andy Doherty, the script by Anne Carter and the music of Jim Crissman, the timeless Journey of the Magi will be brought to life by the movie superstar cast of Joel Ives, John Bethell, Bob Osteen, Mary Scott, Andy Doherty, JoAnne Dickinson, James Houghton, Nick Clark, Kate Dahmen  and Jane Manopoli.  Poster by PeterBrooke, program by Brigid Williams,  all coming to a screen near you by Zoom. 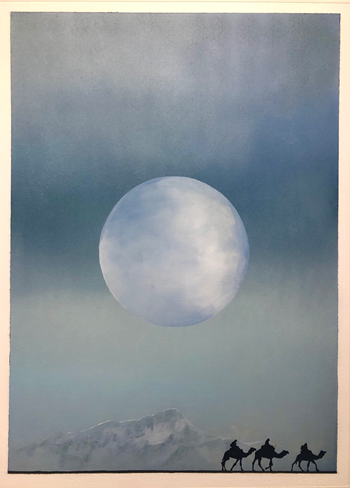 Friday, December 18, Noon:  Friday Lunch at the Tavern, members only.

The Master of MeistUrs himself writes: The Tavern’s annual caroling evening goes virtual. Tom Kelly (are we getting tired of him yet?) will present some new takes on Handel’s Messiah, some background on favorite carols, and will lead us in some socially-distanced but family-friendly caroling, with the collaboration of the Tavern MeistUrsingers. Dust off your vocal cords, deck the halls. (And no, Tom, we will never tire of you. Ever. And ever. Alleluia! —Ed.)

Join us for this most fitting final event for 2020, when Rev. John Finley will discuss Truman Capote’s story A Christmas Memory about Christmas in the Old South with his grandmother. If you print out the link below you will have this little jewel ready for you to read.  Guests welcome.

Click on this link or copy it to your browser: http://www.sailthouforth.com/2009/12/christmas-memory.html

MeistUrsingers: From Sandy Righter: The MeistUrsingers, open to all interested Tavern singers, began almost 30 years ago under the  guardian angelship of Jim Terry. Now the wonderful and indispensable  Tom Kelly, our director/conductor, keeps us connected in spirit even during the pandemic, and generously entertains all Club members by Zoom with talks about and clips from different operas.  Coming up he’ll be giving us Wagner’s Das Rheingold and Verdi’s Otello.  We are so lucky to have him!  He keeps our spirits up and our hearts full of song, though we miss each other terribly.

Novelist Claire Messud will discuss a work in progress based on her grandfather’s role in the North African campaign during WWII.

And much more in the works…

On November 5 (to a two-plus Zoom-screen event of sixty-some Taverners) Peter Bol talked about the very concept of China as a geographical nation, from ancient times to the present.  This talk, with animated maps, was preface to questions and discussion by Taverners.  Bol is a Harvard Professor of East Asian Languages and Civilizations.

Film Night: Where is Mr. Smith who was supposed to go to Washington? The innocent, courageous “little guy” who exposes corruption and saves democracy returned to the Tavern on Film Night as we discussed the 1939 classic—Mr. Smith Goes to Washington—and explored its relevance to today in Washington. With hosts Anson Wright, PK Simonds, Andy Calkins and Rusty Tunnard, we reveled in the performance of Jimmy Stewart in the slow-paced, no color film that harked back to a comfortable mythology of the past. . . and concluded that Mr. Smith would likely have been quashed in today’s Congress. For more recent cynicism we debated the Wag the Dog, and for some uplift on leadership, Lincoln. What movies will come out the current era and the folks in Washington today? All that deal-making, globe-trotting glitter? How about Vuitton Vagabonds! Going to the movies, Tavern style, is produced by the Film Night Committee with Bobo Devens, Martha Eddison Sieniewicz, Anson Wright, PK Simonds, Andy Calkins. Stay tuned for more popcorn and fun at the next Film Night in February.