All Taverners, old and new, are invited. We sing on alternating Thursdays for an hour or so, followed by lunch for those who can stay (sign up with Tony Fay, please).

The November Arts Round Table will welcome guest speaker Michael Maso, managing director of the Huntington Theater Company. Michael will discuss the company’s exciting plans for the future since its break from Boston University, including the renovation of their mainstage home on Huntington Avenue, the ongoing program with BU at the Calderwood Pavilion in the South End, and the challenges and promise of the Boston theater scene in general. 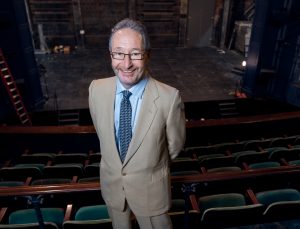 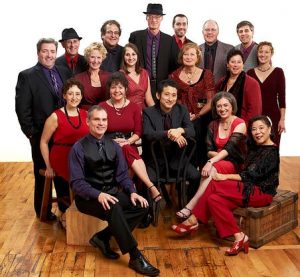 Taverner Elaine Woo’s singing group, Boston Jazz Voices, is coming to the Tavern for a performance on November

17 (re-scheduled from last May). Recently featured on WGBH’s “Sing That Thing,” the group is an 18-voice a cappella ensemble devoted to vocal jazz. They sing sophisticated and complex vocal arrangements with a sound that has been described as “lush and fabulous.” They’ve been in Boston for over 25 years, with performances including Old Sturbridge Village, and the Parish Center for the Arts in Westford. At Merrimack College they produce, host, and perform an annual All A Cappella show.

You’ve seen them on TV, now hear them live at the Tavern. http://www.bostonjazzvoices.org

The Library Committee is organizing a “Library Work Party”. It is scheduled for Monday Evening, Nov. 14 at 6:00. The objective is to band together to organize the book collection while repositioning and cleaning the shelves and to a limited degree the books on them. We will be getting a much closer look at what we have in our Tavern Library collection. A bar and buffet will be set up for us as a reward, with hors d’oeuvres circulating. Those interested in participating, please contact Sam Dennis (sdennis@pafaa.com) so we can get a sense of who will want to join in.

The History Lunch returns to the environment with David Gardiner, an expert in clean energy policy and practice. Formerly Executive Director of the White House Climate Change Task Force under Bill Clinton and the founder of his own consulting firm, David has been involved in climate change issues for over three decades. Having for the first time passed the threshold of 400ppm of carbon in the atmosphere for a sustained period this year, climate change seems like an especially timely topic. On professional merits alone, David is exceptionally well suited to discuss the issue with us. The dividend is that he is Taverner Charlie Gardiner’s son!

Trafford and Jeff Peters, the four charades teams acted, hummed, sculpted and mystified with their ingenious invention and cut-throat, even ferocious, competitiveness.

The three plays were Jonah, (Anne Carter), Director Eleanor Andrews – a mash-up on the Biblical tale of the man and the whale; Four Candidates of the Apocalypse, (George Meszoly), Director John Paul Britton, an almost slapstick-y comedy of a TV news show with some rather formidable guests; and Yankee Hug, (Jane Shaw), Director Nick Clark, a Halloween tale where a Boston Yankee couple meet a werewolf and a vampire. Joan Yogg earned the title of most versatile, playing God, a whale, a sailor and a butler, Staffan Ericsson ably handled another three roles, and Joel Ives made a dashing debut as Jonah… Ann Gund was the best-ever Tavern dog, Bill Cross played Natalie Williams’ enigmatic dancing teacher, and Victor Pena-Cruz the bookish psychoanalyst … while Blake Death, Holly Faminey, Major War and the CNNNNN Anchor were ghoulishly played by Paul Sullivan, Martha Edison Sieniewicz, John Paul Britton and Laurie Coolidge.

On the Battlefield of Merit, Race and Historical Symbolism at Harvard Law School with Taverner Dan Coquillette, who writes:

” When I set out to do a new scholarly history of Harvard Law School, I had no idea I would find myself in the middle of controversies, not just at Harvard, but at Yale, Princeton, Georgetown, and Oxford. I have published Volume One, On The Battlefield of Merit, with the talented Bruce Kimball. It has caused plenty of trouble, and now comes Volume Two, The Intellectual Sword. which will take things to 1980. As one Harvard administrator said to me, “You have made one half million pieces of stationary worthless, together with 200 chairs with the abrogated arms, plus all the new carpets in the Student Center and the engraved glass doors to the Development Office. What are you going to do to us next?” Come and find out!

Volume Two, to my genuine chagrin, has turned up more things that I could not have imagined. Bring your hard questions about how we should deal with history when it is inflammatory!”

Listen to the NPR program, Here and Now, where Professor Coquillette discusses the controversy surrounding Harvard Law School’s official seal (it is just below the book advertisement): http://www.hup.harvard.edu/catalog.php?isbn=978067 4967663

Guest will be Author Jamaica Kincaid.

The Book Club  is taking a winter break, and The Boys in the Boat: Nine Americans and their Quest for Gold at the 1936 Berlin Olympics by Daniel James Brown  will be rescheduled. For 2017 readers should find Paul Fussell’s The Great War and Modern Memory (for February), as well as Siddartha Mukergee’s The Gene.

Please remember to call Tony Fay before arriving to park behind the Club; if parking is unavailable there are alternatives.

There will be a Meeting of the Tavern Executive Committee on Monday, November 7 at 5.00 pm. In addition to Officers and Directors, Committee Chairs are also invited (in a non-voting capacity). Let Tony Fay know if you plan to stay for dinner.

The Club has received an anonymous gift of a period photograph of John Singer Sargent, with salutation and signature, which may be seen on the Library table, now mercifully tidied up for the first time in years, mostly thanks to Sam Dennis.

George Beal
Has never been seen on any stage but is willing to try ours!
Son of Past Taverner Ted Beal