THE CLUB and EMERSON COLLEGE

Ernst von Metzsch writes:
We await the completion of the contract between the Tavern and Emerson, which is in the hands of lawyers at the moment. We are led to believe that no significant issues remain between us. For the time being, Members should call Tony Fay if they wish to park behind the Club. There will be no parking between Thursday, March 24 and Monday, March 28, when a truck-borne crane will be in the parking area, installing the permanent crane on the building site. Please see notes below, and thanks as ever for everyone’s patience. 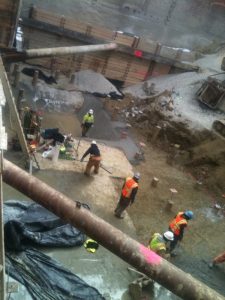 Report on the Emerson Dormitory

Brett Donham and Tony Fay are our guardians as the Emerson project continues, thus far without much interference to our regular Tavern Life. They are in constant contact with the construction people and those representing Emerson. Brett reports that destruction is essentially finished and construction has begun. The hole at #3 has bottomed out, concrete is being poured and steel will follow.

As Ernst von Metszch noted above, parking will not be available for a long weekend at the end of March, as a crane will be in place behind the Club for three days to install the tower crane on the site. The temporary crane is on a large truck with outriggers which take up a lot of space, and then the tower crane which has a small footprint will be in place for 15 to 16 months.

Thursday, March 3
“From Score to Performance with Conductor Moritz Gnann: A Listening Tour with Examples from Operas and Symphonies.”
Cocktails 6.00pm, Talk in Theatre at 6.30, Dinner 7.30     Guests welcome.

A musical play set in the 13th Century, with some modern twists. Feared and maligned by the West, the Tavern’s Genghis Khan wants to set the record straight. He is not exactly Bernie Sanders on a horse, but the great Mongol warrior has been misunderstood. He just wants people everywhere to be free….or else.

Directed by Peter Rand, Book and Lyrics by Abbie Trafford, and music by Jim Terry, Genghis! has a stellar cast, including

Members of the cast, their families as well as friends are welcome guests. Dress informal, ties and jackets for men.

Thursday, March 3, Special Event
Cocktails 6.00pm, Talk in Theatre at 6.30, Dinner 7.30 Guests welcome
“From Score to Performance with Conductor Moritz Gnann: A Listening Tour with Examples from Operas and Symphonies.”

Taverners and their guests are invited to explore music from a conductor’s perspective. Moritz Gnann, the BSO’s new Assistant Conductor, will play and discuss excerpts from operas, including Mozart’s The Magic Flute, Wagner’s Lohengrin, and Xenakis’s Oresteia, and from symphonic works by Mahler and others. To deepen our appreciation of the mysterious process that begins with a musical score and results in full performances of operas and symphonies, Mr. Gnann will touch on personal experiences working with renowned companies in the US and Europe, and with conductors including Simon Rattle, Christian Thielemann, and Andris Nelsons.

Moritz Gnann  is also currently Guest Conductor at the Deutsche Oper Berlin, where he opened the 2015-2016 season with Berlioz’s Roméo et Juliette, and where in past seasons he conducted concerts and operas including Die Zauberflöte, Cosí fan tutte, Hänsel und Gretel, Madama Butterfly, Il barbiere di Siviglia, Rigoletto, and Billy Budd.  Born in Tübingen, Mr. Gnann studied conducting in Berlin and Dresden. His professional career began at the Theater Aachen in 2007 and continued at the Teatro Nacional de Saõ Carlos in Lisbon; he conducted Mahlermania at the Opéra de Rouen, and in October of 2015 debuted with the Staatskapelle Dresden at the Semperoper in Dresden. Since 2010, he has regularly assisted Andris Nelsons at the Bayreuth Festival, and continues there this summer for Maestro Nelsons’s new production of Parsifal.  Mr. Gnann will make his BSO debut at the Tanglewood Festival in August.

Taverner Maisie Houghton, author of Pitch Uncertain, and photographer Tony King, will join Taverner Jock Herron, co-founder of Tidepool Press, to discuss travails of and opportunities for authors and print-oriented artists in the fast-shifting world of smaller, independent book publishing. Maisie and Tony will share their perspectives as artists developing and honing their work for publication, while Jock will offer contextual insights into the hazards and pleasures of smaller book publishing.

History Lunch, March 28, 12:15.
Jim Welu, Director Emeritus of the Worcester Art Museum, will speak on the Monuments Men during WWII.

Jim will focus on George Stout, the long-serving director of the Isabella Stewart Gardner Museum, and the only Taverner (to date) portrayed by George Clooney in a feature film. Lincoln Kirstein, an aesthete’s aesthete, claimed Stout ‘was the greatest war hero of all time because he saved all the art.’ He did not work alone but led an extraordinary group that included Langdon Warner, Francis Henry Taylor, Theodore Rousseau, Paul Sachs, Mason Hammond, Theodore Sizer, James Rorimer, Sherman Lee…a who’s who of the post-war museum world in America. Stout has a special resonance for Jim as he directed the Worcester Art Museum before moving to the Gardner in 1955 where he served until 1970.

MeistUrsingers
Thursday, March 10 and 24 – All welcome! Downbeat 12.20, followed by lunch for those who sign up.

Will focus on Taverner Historian Clive Foss‘s book Tyrants, about the 50 most notable despots or tyrants of the last 2500 years. Entirely in keeping with theme of the Narrenabend Play “Genghis!”, we shall take a look at Clive Foss’s selection, and discuss. Guests welcome.

Poetry Lunch – No poetry in March, but stand by for Wordsworth (and Coleridge?) in April … 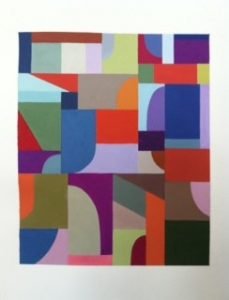 (Dick Scott’s Painting Exhibit will remain up until Friday, March 18.)

Monday, March 21, 5:30 to 7 p.m.
Welcome in spring with a jolt of color. The Tavern Gallery will show Jane Shaw’s paintings, done in gouache (opaque watercolor). Guests welcome at the opening. Members only for Monday night dinner.

On February 4, the Club was honored for the third time in six years with a visit by LEO DAMROSCH. The distinguished former Harvard professor and literary scholar entertained an enthusiastic and lively audience upstairs in the theatre with an illustrated talk about his latest book subject, the C19th English artist, poet, and engraver William Blake. After dinner, Leo spoke most engagingly, answering questions and observations about one of the great geniuses and eccentrics of English history. We are grateful that Leo Damrosch continues to write so wonderfully about a range of literary subjects, and hope that he will continue to be as generous to us when his next book appears, about Samuel Johnson’s legendary London Club, which included Edmund Burke, Oliver Goldsmith, David Garrick and Sir Joshua Reynolds, to say nothing of James Boswell.

VALENTINE’S CONCERT, February 10 – Eli Newberger and his world class all-star Jazz Band played a glorious concert of Gershwin, with Tavern vocalists Watson Reid (S’Wonderful), Bob Osteen and Elaine Woo (How’d You Like to Spoon?), Ben Cox (Liza and Embraceable You), Ute Gfrerer (But Not For Me and La Vie en Rose),  Jim Terry (Fascinatin’ Rhythm), Elaine Woo and David Scudder (Let’s Call the Whole Thing Off), Nat Coolidge (Summertime), Nancy Wilson (They Can’t Take That Away From Me), Elaine Woo – with Carolyn Newberger on washboard (I Got Rhythm).

April 20 – History Lunch – Fred Winthrop and Jock Herron will lead a discussion about the prospects for the working landscape in New England. Participants for this follow-on to Ocean’s Rising last October include another former Commissioner of Agriculture for the Commonwealth, the general manager of the last farm in Boston, the director of a leading non-profit growing fresh produce throughout Greater Boston, Mayor Menino’s former head of food policy…and other agriculturalists!