The Tavern Club and Emerson College 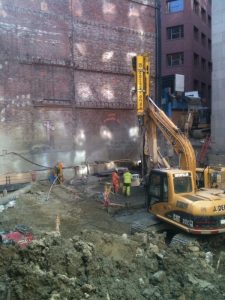 The President reports that the Tavern Club has been waiting for a response from Emerson College regarding the Agreement we have been negotiating with them.  They have come up with changes to what we thought was the final Agreement and we have replied to those several weeks ago.  Without an Agreement, parking in the rear alley will continue to be available.  We will let you know if and when this changes.

Progress Report on the Emerson Dormitory

The Tavern welcomes again Leo Damrosch, one of the great literary scholars of our time, who taught many years at Harvard and has since retiring produced three major works, an example to all the retired. He has addressed the Club on two of his books – on de Tocqueville and Jonathan Swift – and will now talk to us about his latest work, Eternity’s Sunrise: The Imaginative Work of William Blake. Blake is one of the supreme artists of history, a poet of great power and originality, an artist of huge gifts (once called the greatest artist Britain ever produced), a printmaker, as well as an original and eccentric thinker who challenged many aspects of contemporary life and society, the Church, slavery, the institution of marriage, and many others. By any measure Blake was a towering figure yet always an outsider, disdained by many, and himself disdainful.

We are honored that Leo Damrosch is visiting us again, and look forward to hearing him talk about Connecting with William Blake.

After dinner, undoubtedly a few questions. Please sign up soon, and do bring your guests too.

Eli Newberger has once again assembled his All Star Jazz Group, as well as some or our own Tavern Club talent. Eli writes:

“My traditional jazz band will provide bespoke support for our own vocalists and additional interpretations of iconic Gershwin songs. The musicians: Bob Winter, piano (Berklee College of Music and Boston Pops Orchestra), Jimmy Mazzy, banjo and vocals, Bo Winiker, trumpet, bandleader, Boston Pops guest conductor, Ted Casher, clarinet and saxes, Herb Gardner, trombone, and Bob Tamagni, drums (Berklee College of Music), Newberger, tuba and leader. The Program will draw from masterpieces ranging from They can’t take that away from me to It ain’t necessarily so!”

The Arts Round Table will join forces with the Poetry Lunch to welcome poet and translator DAVID FERRYto the Tavern. The 2013 National Book Award winner for poetry, David will read from and discuss some of his translations of Virgil’s Aeneid and The Epic of Gilgamesh, as well as some poems of his own that relate to these translations. According to Dan Chiasson of the New Yorker:  “No American poet has translated better the greatest classical authors”.   Guests welcome.

The history, conflicted present and the future of reproductive health intersect when Dr. Thoru Pederson (Vitold Arnett Professor of Cell Biology at UMass Medical School and former director of the Worcester Foundation for Biomedical Research) joins us for lunch to discuss the history of The Pill (developed over half a century ago at Worcester), the role of Margaret Sanger (a founder of Planned Parenthood), and some extraordinary scientific developments over the past decade that will keep reproductive biology on the political front lines for years to come.

The Tavern Book Club will meet at noon on Wednesday, February 24 to discuss Michael Lewis’s wicked book The Big Short, dealing with the financial collapse following bursting of the housing bubble. The excellent current movie based on the book will provide supplemental or alternative fuel for David Scudder’s deep discussion.  (See also under ‘Long Term’)

Remember: Try to sign up in a timely manner for ALL lunches and dinners:

The new show of Dick Scott’s Paintings opened in the Gallery on January 29.

Dick started painting when he and Mary Scott were still in college and first married, and sales helped ends meet. Dick has lately retired and is taking up painting again, or as he says “My easel is back up”. He started using Impressionist painting to develop technique, and some of his work reveals that influence. He has done abstract pieces and pencil drawings. When painting he uses “an aluminum foil palette, a palette knife, a roll of paper towels and a paper trash bag.”

There have been periodic attempts to revive on old Tavern custom of buying a group of tickets for plays at theatres close to the Club, and making those available to members, with if possible a pre theatre supper at the Club. Bill Cross has volunteered to manage such an undertaking, and it would be helpful before committing to take a reading of likely support from members.  Please email  Bill at WCross@EatonVance.com with your interest .A chance to get lower price theatre tickets, and to go to theatre with a few friends.

A tavernly start to the weekend, with an enthusiastic gathering of  Taverners and guests on the third floor with drinks, hors d’oeuvres and a microphone … Watson Reid and guitar the calypso-swinging anchorman, Eli Newberger  rumbling melodically on tuba, Carolyn Newberger clattering rhythmically on washboard,  Nancy Maull and Jeff Peters heartrending in duet, JoAnne Dickinson bewitching in cabaret, Tadhg Sweeney and E.V.  nostalgically enchanting in verse and anecdote, Sandy Righter and Gene Dahmen tunefully mesmerizing – and a standing ovation for JoAnne’s  accomplished young pianist grandson Christopher who gave us a stunningly memorable Mozart performance.

MID-WINTER FEAST
January 14, 2016 : The Secretary and his Amanuensis received the following letter from a former President:

Thank you, dear Tavern friends, for the extraordinary Mid-Winter Feast at which my family and I were greeted and treated like royalty, and pretty well overcome by the generosity of what was said, the gift of songs reprised and written (with the mildest of tweaks) for entertainment or nostalgia,, the quality of the feast itself and the strong underlying almost narcissistic atmosphere of keen enjoyment of the whole works. Particular thanks are owed to so many of you that I don’t dare to start. Instead, a confessional about my recovery from your kind attentions.

I had resisted your invitation, feeling it was inappropriate to be honored for the things I’ve done with you at the Tavern for my own pleasure and amusement, to the great enhancement and enrichment of my own life. This feeling grew sharply as the evening progressed. After all, I’d originally been hooked by Tavern plays (my first part was in a Hallowe’en play, a one-liner as doorman for a fortune teller (Hugh Shepley) who had to feed me my line on Ladies’ Night, as it was then known, though I delivered it on my own on The Night). Participation in plays, whose regular rehearsal schedule and clear end-point could be squeezed into a tight work week, then became my fix. Should I be thanked for feeding an addiction, praised for enjoying the club? Would my proposal to “in Taberna mori” be granted because I couldn’t get my head out of the door? There was something out of kilter, unfair about all this.

Once home (Tony removed the hinges) there was some justice, as I learned that even a boozeless binge, being hit by that kindly wave of thanks and praise, packed a wallop and I spent as much of the next day as possible in bed. Then I struggled for a while to figure out what had happened to me. Just contrarian nature or Libran fate to find a way to be unhappy about one of the most marvelous occasions of my life?

Some days later I wandered into the kitchen to hear a radio voice say that something which must have been described as a phenomenon was not that, but was only the “visible aspect of a much broader phenomenon”.

Were they talking about a symptom of a disease, a case in an epidemic, a house falling in an earthquake? I have no idea, but it clicked. I’d been invited to be the “visible aspect”, an example; and the “much broader phenomenon” was the “fellowship of the Tavern” into which the Perry Speech begins by welcoming us all.

Though the word seems old-fashioned, maybe even gender-laden, that fellowship is a network of strong friendships formed, incubated, enjoyed, sustained, deepened and remembered as we use the club and come to love doing so with friends, old and new.

The feeling that you’d been given an opportunity to join a circle of good friends was palpable in 1971 and I hope and believe continues to be today. I got to know people who were Taverners before I was born, find it a delight to be getting to know Taverners born after I became one, count many in between as among the closest and most influential in my life, and continue to savor every moment of my long love affair with the club.

The focus of the Feast was on me, having been anointed as the visible aspect of that broader phenomenon, the fellowship, the friendships, at the heart of the club. As I’m one of those who’s taken most advantage most benefited, I’m privileged to be a sort of case study for the great opportunities and rewards of active membership. The kindly wave that hit me was the product of and should have been directed at both ends of all those Tavern friendships, present and absent, not just my own end of my own friendships. This tries to send that wave on to you. I was pleased, honored and touched to be your poster boy. So again – thank you.

Update: Frank Igo is in Florida; unfortunately broke his nose, but was back on the golf course without pause.

Lawrence Coolidge
Bibliophile, Traveller in the old sense,
Overseer of the Esplanade, Pursuer of causes